Last fall I had the opportunity to acquire a great domain – one that was already quite popular within the Ajax realm: MiniAjax.com. It made a splash when it was released in early 2007 – and while it, literally, hasn’t been updated since it first came out, it continues to draw a large audience. 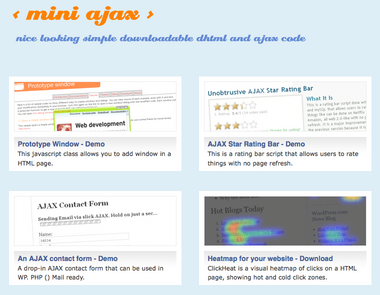 That simple premise has drawn some phenomenal numbers:

Any sort of update to the site would be sure to dramatically increase the, already substantial, traffic. There is nothing “powering” the site at the moment – it’s just a static HTML landing page, some images, and a static RSS file.

Unfortunately, after owning the domain for just over a year and doing absolutely nothing with it, I’ve decided to pass it on. I’ve already received a couple offers by email but I’m open to more. My email address is: jeresig@gmail.com.